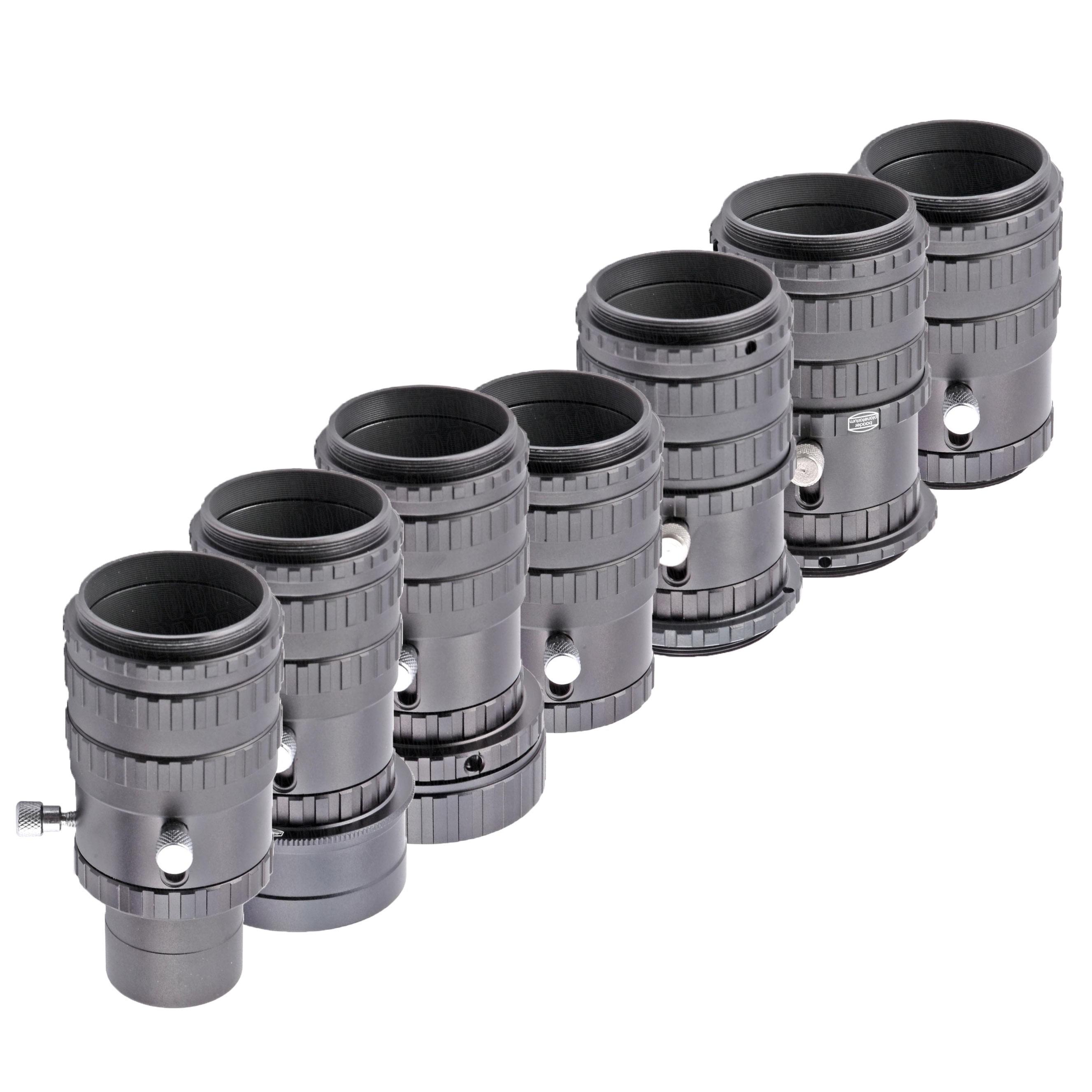 Design and description of the Baader ADPS systems for afocal projection

The projection system ADPS (= Afocal Digital Projection System) is very similar to the Baader OPFA system for DSLR cameras - but the distance between the projection eyepiece and the lens of a digital camera can be set to a much shorter value!

Eyepiece projection (so-called afocal projection) in combination with compact cameras requires a much more precise setting of all mechanical distances than in the classic eyepiece projection with a DSLR, where the lens can be removed from the camera body.

Our ADPS projection system is made of a very finely stepped series of extension rings (and a T2 locking ring) to adapt it to any 1¼ "eyepiece (with a diameter of up to 38 mm), so that the eyepiece can be positioned as close as possible to the first lens of the camera lens! Only this close distance makes a sharp image without vignetting possible.

Our ADPS afocal projection systems are all built like the one in the follwing example (from right to left). The blue marked parts correspond to the ADPS-4 basic version with male T-2 thread on the camera side and a female T-2 thread on the telescope side. The adapters on the telescope-side which are marked green in the figure are included in the scope of delivery of ADPS 1-3 and ADPS 5-7 (ADPS 1 and ADPS 2 are shown in the example). The parts marked in red are not included in any ADPS! 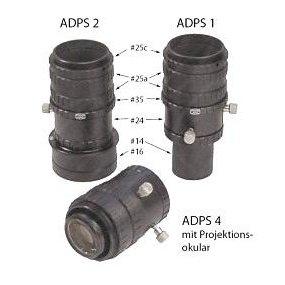 The construction starts on the right, on the side of the telescope (at the focuser). Shown in the picture (marked in green) are here alternatively a 1¼" and a 2" nosepiece. If your focuser has a different connector please choose between ADPS III to VII (eg ADPS III for Celestron and Meade Schmidt-Cassegrain telescopes).

A central component of all ADPS systems is a sliding focuser (marked in blue) with a T2 locking ring. The 1¼-inch projection eyepiece (not included in the ADPS) is inserted into this sliding focuser, and the sliding focus allows precise adjustment between eyepiece and camera lens.The locking ring allows the camera to be rotated continuously relative to the focuser in order to optimally position the camera for an image.

Then, three T-2 extension tubes (2x15mm, 1x7, 5mm, also marked blue) are screwed onto the sliding focus, the eyepiece (with a maximum outer diameter of 38mm) is now inside of the tubes. These tubes are used to achieve the correct projection distance. In addition, you need matching DT I adapters and the DT ring to connect the camera to the ADPS.

Please note (!): The manufacturers of digital cameras without interchangeable lens want to prevent the zoom lens on your camera from damage, when is retracting or extending! That's why many cameras either don't have a filter thread or some strange thread not commonly used on the camera. Then, you must buy some adapter for front filters from your camera dealer! This is usually a large-sized adapter with a certain length which makes sure that even a fully extended zoom lens can not touch a filter.

Please always read the operating instructions of your camera and check which thread size is offered on your camera body as adapter thread on the camera side. That's usually really easy! If none of our digital DT-rings fits directly onto the filter thread of the camera lens or the camera body itself, then the necessary spacer ring must be ordered from your photo retailer. These items are usually called filter adapter. Only if such a thread is available, a camera can be fixed directly via a DT adapter (eg SONY / M37 with DT adapter I) or with one of our DT-rings to the ADPS.